Ola Joulani had gold in her hands and didn’t know it. She had never dared, nor imagined selling her embroideries, let alone becoming an entrepreneur.

Ola had a turbulent childhood that made her insecure and fragile. She was born into a large family, with four brothers and two sisters, and was motherless at the age of seven. Shortly afterwards her father married another woman, but since she was a child, she had to learn to take care of herself. The stepmother forced her to leave school after eighth grade to help at home. Shortly thereafter, she married, resumed her studies but with her marriage commitments and the birth of her three children her life did not improve, so she failed to graduate as she wished for.

In the 1990s she began a collaboration in the Shuafat refugee camp in East Jerusalem, where she assisted women victims of violence. Even today, she continues to carry out this activity and is part of the Administrative Committee of the Woman Center. “In Shuafat camp, women victims of violence need to be supported and rehabilitated, there is a lot of violence there, especially within the family” she tells us. 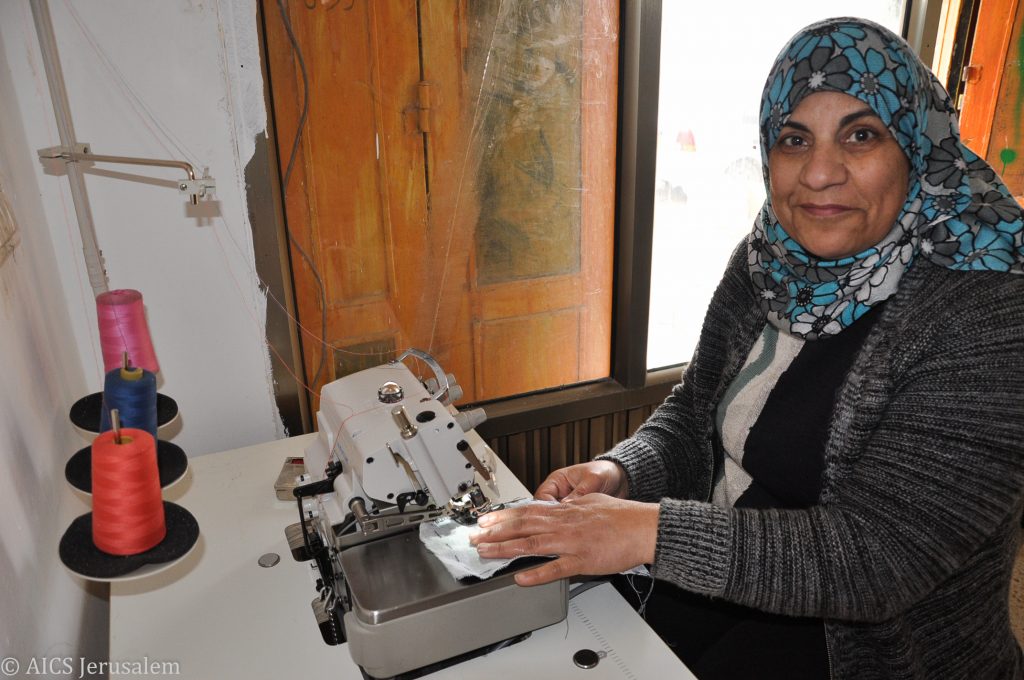 Along with her work, she had always cultivated a passion for embroidery, but she had never thought of turning it into a business. Only the encouragement and the support of a friend, fascinated by her work, finally pushed her to dedicate herself professionally to her ability. “I was embroidering a tray to give to my sister when my friend urged me to participate in a craft fair. I accepted her invitation and thanks to her I took the first step forward, discovering an income generating work”   Ola tells us when we meet her in her laboratory, a rented room on the ground floor of the building where she lives.

When we enter, she makes us sit down, offers us strong, aromatic Arabic coffee, sits behind her sewing machine and shows us the embroidery arranged on tables and shelves, on cushions and sofas.

“I accepted the challenge of bringing my products to the market because my friend offered her help. I attended the first fair with her and it went well. Feeling sustained helps not to give up” adds Ola, searching through her memories, with a frank and lively look that makes the flowers on her headscarf stand out.

Ola allowed her friend to help her in setting prices, in arranging the merchandise, and supported by the trust and appreciation of her friend, her abilities were shining. Now she spends her time embroidering and organizing her business.

She even involved two girls as assistants to sell the embroideries, which sprout from an ancient Palestinian tradition, a refined art made patiently transmitted from generation to generation within in women’s popular heritage, filled with the symbols of their cultural identity. Thanks to the concepts learned in the training courses carried out by the Italian Cooperation funded project, her horizon has expanded and she has diversified her activity, receiving two new machines and 1400 shekels (about 350 euros) of raw materials to enhance her business.

She acquired a new awareness of herself, becoming an entrepreneur capable of working not only for personal fulfillment, but also to increase her earnings and improve her daily life and that of her family. With a hint of pride, Ola adds: “With the course I learned how to make estimates, calculate income and expenses and organize costs. Before I didn’t take care of the gasoline cost for the trips, now I calculate everything and my husband and my children are so proud of me ”. During the course they also taught her to photograph her works and promote them on social media. 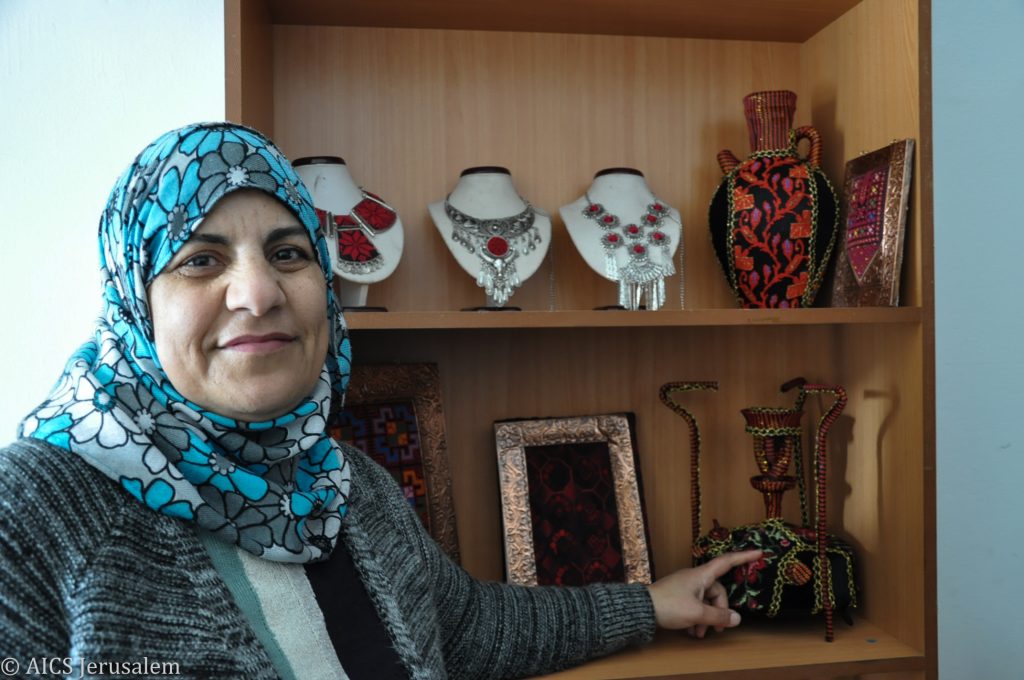 She has learned new techniques and now uses her creativity in different ways, from bags to objects, working with copper, which is rare in Jerusalem, she has learned to put embroidery on terracotta and now she herself set prices for her merchandise at exhibitions.

In Palestine many women are victims of conservative traditions and customs in which men limit women’s choices in the name of protecting the “honor” of the entire family. “My girls work in their apartments, their husbands don’t let her come to work for me. I bring them the materials. I pay according to the amount of thread used for embroidery. In this way they can use their time well and even those who cannot leave home can work and lead a productive life”.

“We should learn how to transform negative experiences into positive” – ​​reiterate Ola – “I know people who, when they see an obstacle, they give up. Instead we must react and channel our energy in the best way”.

Six girls work with Ola today. Some even carve wood or work the leather to make bags. She is happy to help other women who she hope, in the future, will help others in return.