Ramallah, October 30, 2018 – The PGFTU’s Gender Secretariat, and in partnership with the Ministry of Labour and the ILO, launched today a national campaign titled “Women Workers’ Decent Work and Right to Organize”. The initiative falls under the programme “Promoting Women’s Equal Access to Economic Opportunities and Decent Work in Palestine” implemented jointly by UN Women and ILO and funded by the Italian Development Cooperation.

The national campaign will encompass awareness field visits in different locations of West Bank and Gaza to familiarize women workers with the labour laws and legislations governing the workplace. This will increase their proficiency and knowledge of the labour laws and best working methods, including mastering negotiation skills and signing collective labour agreements. Targeted women workers will be able to address forms of violence and harassment in the workplace, and the restrictions workers face in the Palestinian and Israeli labour markets. Thus, the campaign will contribute to empowering women workers and combatting gender inequality and discrimination at the work place. 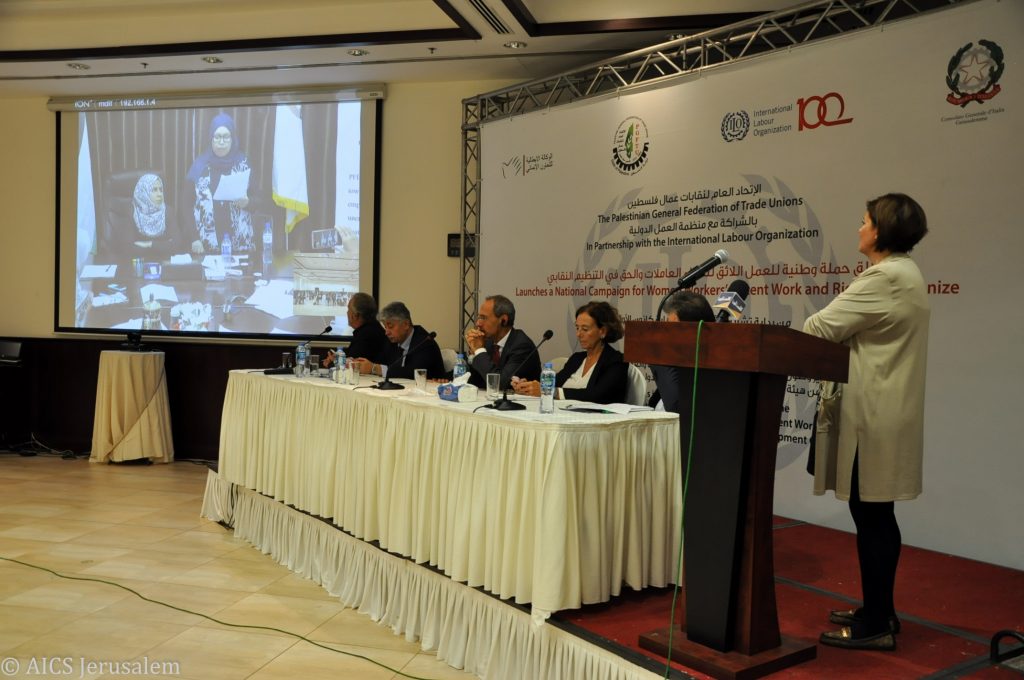 Dr. Ma’moun Abu Shahla, the Minister of Labour, noted that “The launch of this campaign is one of the apt mechanisms to raise awareness of women workers’ on their rights and to encourage them to join trade unions that can support their demands, through the formation of protection networks in the labor market”.

Mr. Shaher Saad, PGFTU Secretary General, highlighted that “the struggle for the rights of women workers to endorse decent work regulations cannot be realized without trade unions capable of defending these rights. Trade unions are an embodiment of workers’ aspirations for equal opportunities and fair wages. Hence, on this occasion, the PGFTU stands by the side of local and international partners, who launched the decent work campaign across the world.”

Mr. Fabio Sokolowicz, the Consul General of Italy in Jerusalem, stated that “By funding this program that aims at encouraging women’s equal access to the labor market and broader gender equality in Palestine, Italy is fulfilling its commitment in support of Palestinian institutions”.

Ms. Cristina Natoli, Representative of the Italian Agency for Development Cooperation, stated that “AICS is proud to support the campaign and to support, together with UNWomen, ILO and partner organizations, the enhancement of a gendered labour legislation and the present social change towards zero tolerance to violence, harassment, and discrimination against women and girls in the workplace”.

Mr. Mounir Kleibo, Representative of the ILO in Jerusalem, underlined that “ILO’s primary goal is to promote opportunities for women and men to obtain decent work in conditions of freedom, equity, security and human dignity. The Programme will focus on increasing women’s participation and leadership in trade unions through capacity building, increasing their awareness of their workers’ rights and the understanding of ILS and conventions particularly those related to freedom of association, the right to organize and collective bargaining”.

The Gender Secretariat at the PGFTU is implementing the awareness raising campaign in partnership with the ILO. The campaign will run until the end of December 2018.