Women in Palestine work in schools, in agriculture, in the third sector in general. In 2018 women’s unemployment rate was 51%, double of men. They earn less, even half of men’ salaries. They often are the only breadwinner and at the same time they must take care of houses and kids. In some cases, they can receive just two dollars per day.

We discuss this startling framework with the Deputy Minister of Labor Abdel Kareem Daraghmeh and the Gender Unit Responsible at the Ministry, Ms. Iman Assaf. However, thanks to the revision of the Palestinian labor law implemented in the framework of the Decent Work project by UNWOMEN and ILO (international Labor Organization) and funded by the Italian Cooperation, the situation is getting better. Palestinian Labor Law is considered a good practice in the Middle East but the military occupation of the West Bank makes its application very difficult, because of the fragmentation of the Palestinian territories and the subsequent issues for Ministry inspectors to travel around and monitoring the application of the Law.

“Thanks to the Italian project, our officials have been trained, the logistic of their work has been enhanced and the whole monitoring and penalty system has been speeded up; we were also able to make the complain mechanism for workers better” the Deputy Minister declares. “Now it is possible to file a nameless complaint and call a hotline available night and day”.

In Palestine, workers are scared to lose their job if they file an official complain to the Ministry, due to the deep lack of job opportunities, for men and women – it is better to accept what you have and keep going with your bad and underpaid job, ignoring your rights.

The joint effort delivered by the Ministry of Labor and the Union accomplished relevant results: during the awareness campaign, more than 700 women workers understood the importance of the Union and they signed up. Two third of them live and work in the Gaza Strip. We meet up six Representatives of the Palestinian General Federation Trade Union coming from Nablus, Hebron, Bethlehem and Ramallah. They share with us stories with different outcomes, achieved or not, where the constant elements are discriminations for women workers, violent threats, the deduction of part of the salary or even the hesitation to invoke the Law in order to improve their condition. 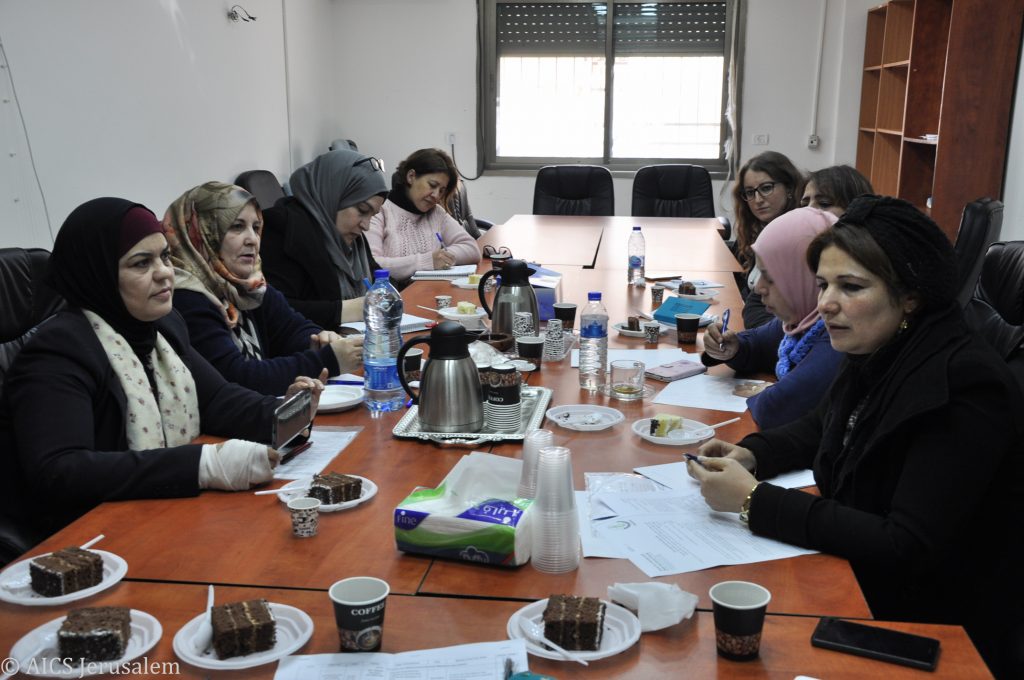 But sometimes Palestinian sun filters through the window and enlightens faces and stories: entrepreneurs not aware of the available legislation recognizing rights to the employees, thanks to the awareness sessions provided by the Union; a dismissed with no justification woman that took her job back; the assurance of the minimum wage guaranteed for all the workers, in some particular and virtuous cases. We recall the meeting at the Ministry of Labor, when Iman Assaf introduced us to the consultation and the networking effort delivered with civil society, entrepreneurs, unions. Key players of this process were in particular the Unions, steering the Law revision work and guiding the drafting of the Position Paper. We discover this commitment listening to the vibrant stories told by these representatives that work everyday on the field to enhance women’s access to their own rights, ready to be adopted and respected: retirement, maternity leave, minimum wage, social security which is on a lively debate in the last months in Palestine.

It seems to be a hard but necessary mission, aimed at bridging the unbearable gap between theory and practice. How about future? we ask Aysha Hmouda, Secretariat at the Gender Unit. She replies with a confident smile: “We have to keep going on this path, strengthen the cooperation between women in order to increase rights awareness and to decrease inequalities on workplaces. We are not inferior – we want a leading role!”