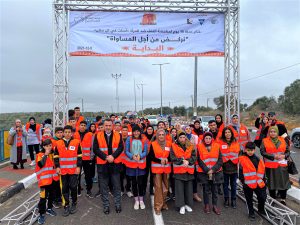 Salfit – Ending the 16 days Campaign Against Gender-Based Violence with a 3 Km. run in Salfit, organized by YWCA Palestine, in collaboration with Salfit Municipality and the Palestinian Forum for Combating Violence Against Women (Al Muntada), and funded by Agenzia Italiana per la Cooperazione allo Sviluppo. A one hour run for Gender Equality started in Salfit and included the launching of orange balloons, musical and theatrical performances, and the Announcing of the winners of the race and the best film contest, in which 9 videos regarding the campaign were presented to a committee. As a result of, 3 videos winners selected including one from #Gaza.