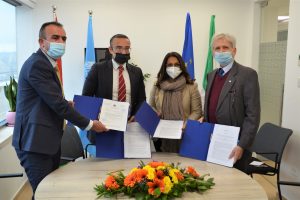 The project aims to ensure the effective conservation and management of the cultural resources within the area and to promote sustainable tourism development that benefits the site and the local communities. Through the generous funding of Italy amounting at Euros 2.4 million, the project partners shall leverage their respective expertise to implement the designated project interventions under the overall supervision of a steering committee chaired by MoTA.

His excellency, Consul General of Italy in Jerusalem, Mr. Giuseppe Fedele stated “today, the signing of this agreement is a further step forward in our longstanding commitment to support the protection, conservation and valorization of Palestinian cultural heritage. This achievement was made possible through the commendable work of the Italian archaeological missions which, over the years, made their expertise available to Palestinian professionals and institutions, in particular the Ministry of Tourism and Antiquities. Once again, thanks to this additional funding, the outstanding professionalism of major Italian archaeologists from La Sapienza University and the synergies with all the partners involved, Italy will significantly contribute to the enhancement of Tell es-Sultan, also for the benefit of local communities and with the aim of boosting the socio-economic development of the Jericho Governorate”.

Ms. Noha Bawazir, UNESCO Head of Office and Representative to Palestine said: “I would like to warmly thank Italy for the generous support to cultural heritage in Palestine. The agreement signed today will help complement in a strategic way UNESCO’s activity in support of the conservation, management and promotion of Tell es-Sultan as a site of significant values and great potential. Through its World Heritage Fund, UNESCO supported Palestine in preparing necessary studies for the elaboration of a Nomination Dossier for a possible inscription of the site on the World Heritage List”.

The project partners shall ensure applying international standards of conservation, management, interpretation and development, which are employed while intervening in similar significant heritage sites.

Dr. Ahmed Rjoob, the General Director of the World Heritage Directorate at the Ministry of Tourism and Antiquities, extended his thanks and gratitude to the project partners; The Italian Government, the Italian Agency of Development Cooperation, Jerusalem Office, the Sapienza University of Rome and UNESCO Ramallah Office for their support to the State of Palestine in the conservation and development of its Cultural Heritage. Dr. Rjoob stated “MoTA is working on submitting the Nomination Dossier for the site

(Ancient Jericho/Tell es-Sultan) to the UNESCO World Heritage Centre aiming at inscribing the site on the World Heritage List. This project which will strengthen the Nomination Dossier as it includes the preparation of a management and conservation plan for the site that will put forward a road map for the conservation, development and presentation of the site’s potential Outstanding Universal Value and its physical attributes.”

It is worth noting that the archaeological site of Ancient Jericho/Tell es-Sultan is among the most important sites in Palestine and in the world. It has a rich and long-lasting cultural attribute, spanning from prehistoric eras, attested by diverse material culture found and still visible in the excavated trenches at the site. It is often presented as the ‘oldest known city in the world’, exhibiting an important interchange of human values. For this reason, it is listed on the Tentative List of Palestine for natural and cultural heritage sites of Potential Outstanding Universal Value that could be nominated for inscription on the UNESCO World Heritage List. Due to several factors both natural and human made, the site is facing serious risks that would jeopardize its value if urgent interventions are not implemented.