Jerusalem, February the 4th 2020 – The mission to Palestine of the OIV – Independent Evaluation Organization, represented by Advisor Mr. Stefano Glinianski and Mr. Leone Gianturco, Director of Planning and General Affairs of AICS, was held in order to verify and discuss the results of the survey submitted by AICS Jerusalem’s stakeholders. The analysis was aimed at assessing the role and work of AICS, within the pilot participatory evaluation exercise initiated on a regional basis.

The delegation had the opportunity to meet Representatives of the World Health Organization, the Ministers of Women’s Affairs and Health, the Italian CSOs and the Italian company in charge of the restoration work at the Basilica of the Nativity, as well as to visit some project sites. 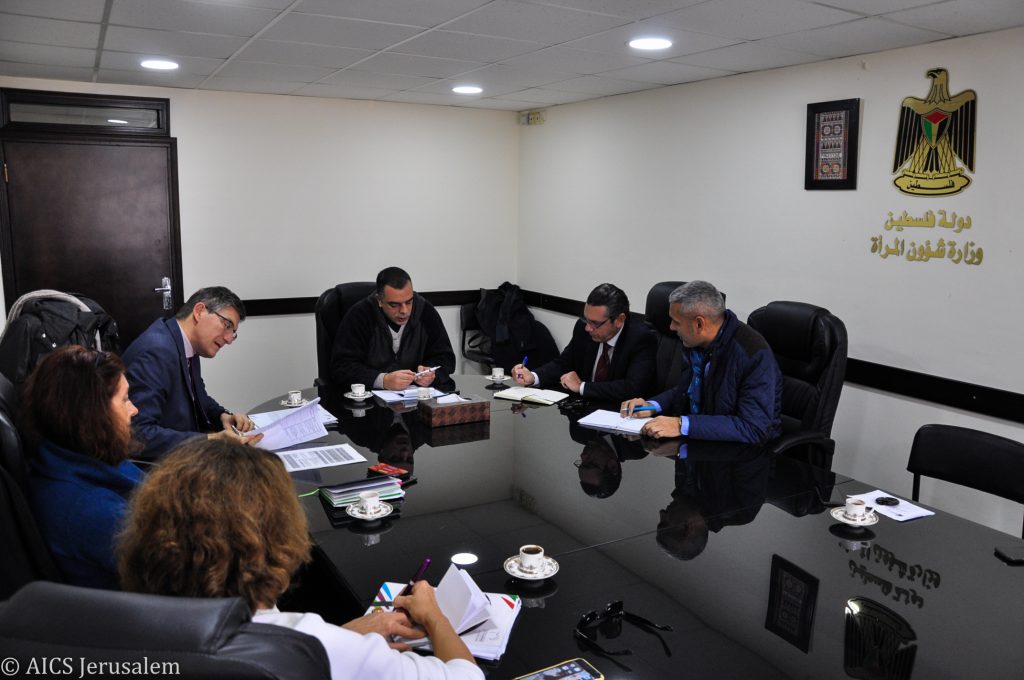 AICS Jerusalem is a fundamental actor in the implementation of the programs of two Palestinian ministries, Health and Women’s Affairs, through the EU Joint Programming (EU JP), playing the role of lead donor for Health and Gender. From 2019 on, AICS Jerusalem also has served as co-chair in the LACS (Local AID Coordination Secretariat) for the Health sector, and the intention of the Ministry of Women’s Affairs is to set up a similar working group for Gender, with the involvement of the Italian cooperation. The meetings held with the Technical Representatives of these two Ministries provided the Delegation with clear evidences of the importance of the follow-ups characterizing the work of AICS Jerusalem’s experts.

The Italian support to the Ministry of Health, on both financial and technical level, translates into a much-appreciated support for the update of the National Policy Agenda for the upcoming two years. Similarly, the Ministry of Women’s Affairs welcomes Italy’s commitment to foster consultations and value important best practices identified on the ground, in line with the Minister’s strategy. 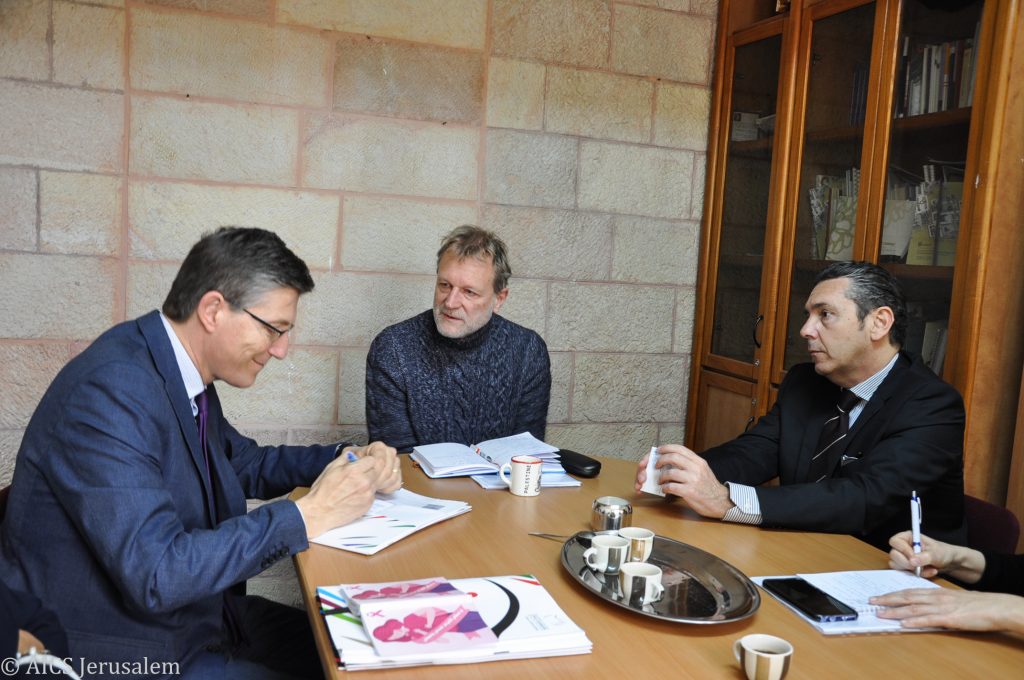 The meeting with the WHO Country Representative allowed the OIV to collect remarks concerning the timing and modalities of work, to understand the Italian leadership role in coordinating aids for the health sector in Palestine, the implementation of activities in the Gaza Strip and the constant adjustment to a scenario hanging in the balance between development and emergency.

The renovation works at the Church of the Nativity in Bethlehem was presented by Gianmarco Piacenti, with a focus on the mosaics on the ground and the twelve Crusader columns. The renovation works will be combined with a risk-management training component for local workers, drawing a specific attention on respecting the coexistence of three different confessions without bumping into any sensitivities while working efficiently.

In Jericho, the delegation had the chance to meet the staff of Fondazione Giovanni Paolo II, Italian CSO implementing an agricultural and commercial initiative aimed at improving the production and marketing of higher quality Palestinian dates. A visit to the refrigerating room for fruit storage was carried out also in order to let the delegation understand the main features of the project: intervention in a specific sector previously ignored, growth of the cooperative sector in Jericho, support for development on foreign markets. 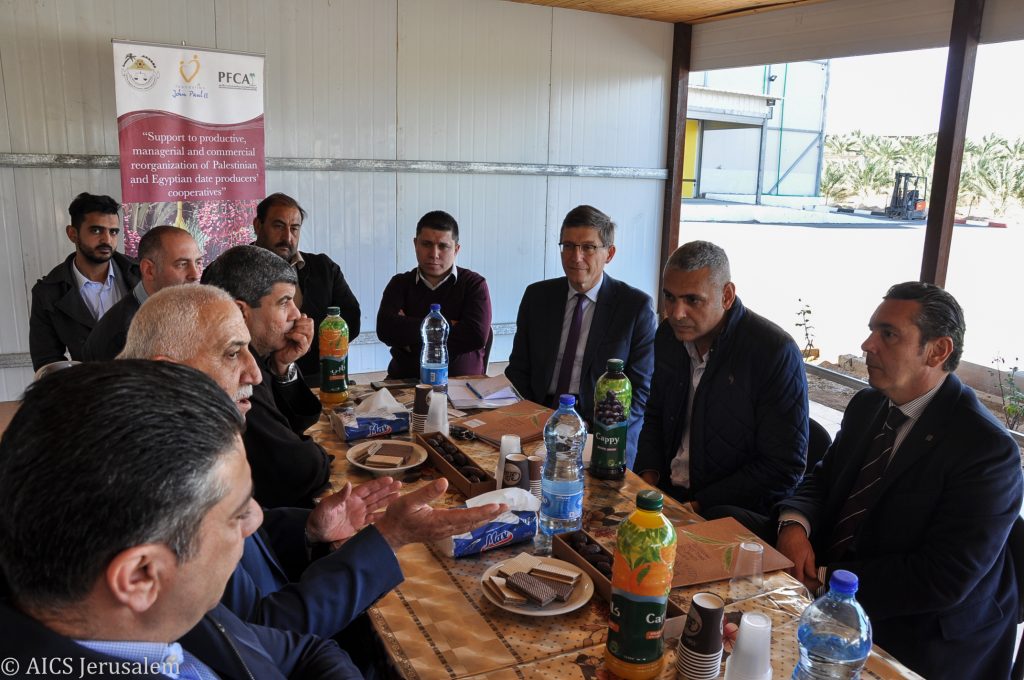 Fondazione Giovanni Paolo II was not the only Italian OSC met by the delegation. A large group of Italian CSOs, committed to carrying out development and humanitarian projects in Palestine with Italian funds, attended a meeting at AICS Office in Jerusalem. During the meeting, the comments arose during the assessment related to call for proposals (Promosso, Affidato, Emergenza), to the role of the CSOs in the aid system in Palestine, to the coordination support from AICS, to the needed improvement in the timeframe disbursement of funds and proposals’ evaluations were discussed. The activity was perceived as a useful tool and a good opportunity for dialogue, appreciated by the stakeholder participating in the meeting. 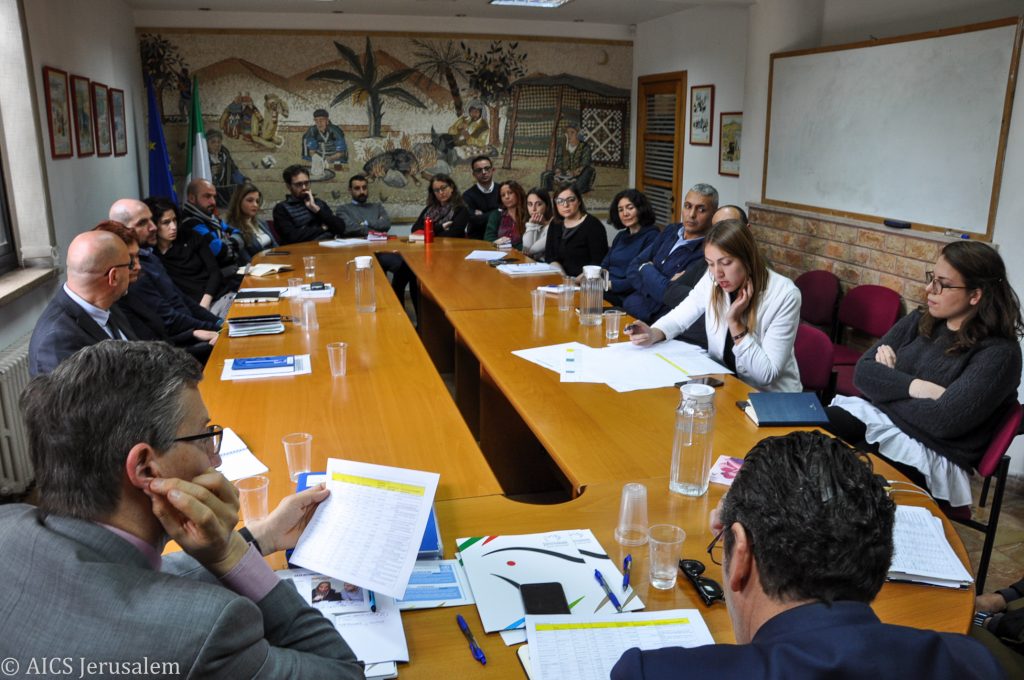 Furthermore, Mr. Glinianski and Mr. Gianturco listened to the comments and critical issues that emerged from the meeting with AICS Jerusalem staff, during which the Program Managers were able to report in detail how the work is structured. This final meeting represented a chance to draw attention on the importance of a steady communication system between AICS Headquarters and local offices.