Jihan Sherbini is young and full of determination. She moves with agility and enthusiasm in the halls of the fitness center she has run for nearly three years in Ramallah. She receives us wearing a red headscarf, a shade similar to the kickboxing gloves she is wearing with her gray sport suit. She is proud of her achievements that required so much courage, but also the diligent study of the market space. She put herself to the test, broadening her horizons, developing awareness of her rights as a working woman and new specific skills in the field of wellness, using the infinite potential of breathing techniques.

“Breath is life, the essence of survival, it has to do with the future and in Palestine we need it so much” she stresses referring to the name chosen for her center, “Breathe Fitness“, which soon enough became for her an opportunity for personal and professional growth. 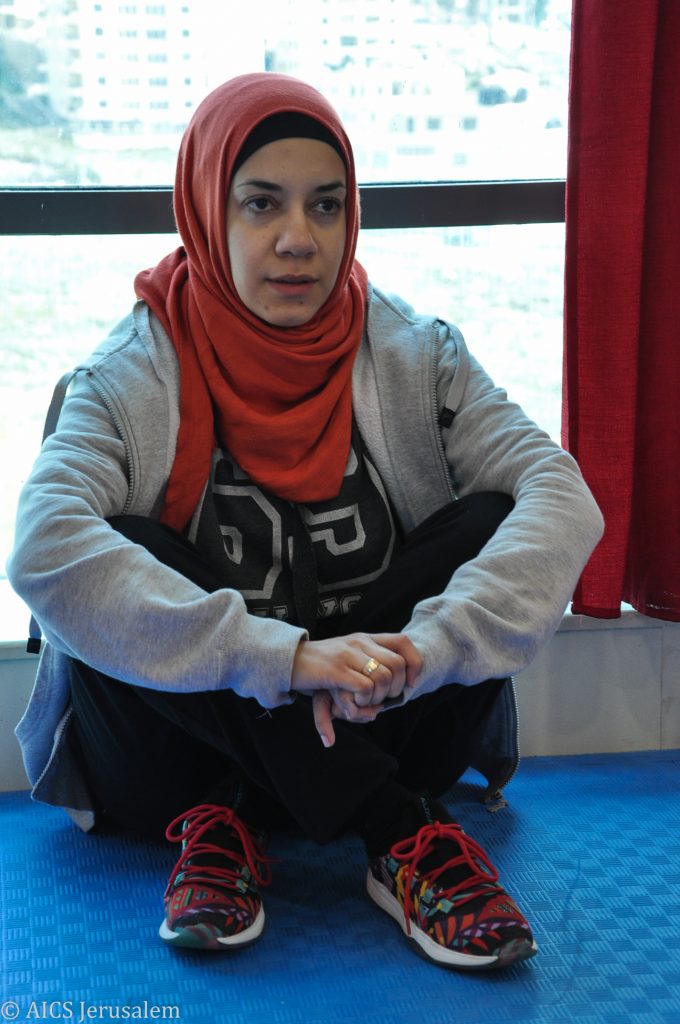 Jihan is originally from Nablus but lives with her husband and five-year-old daughter in Ramallah, the very center of the West Bank and it can be considered the most modern and cosmopolitan city in the occupied Palestinian territories. She graduated and took a master’s degree in languages. She worked in the Ramallah University in public relations as an interpreter, but she did not like the sedentary office work and the salary was insufficient. She started going to the gym and attended a course to teach fitness.

In 2012 she became the first female kickboxing coach in Palestine. When problems arose in the workplace, she resigned and remained unemployed. At that point she felt like suffocating, without any motivation to go on until she listen to a friend’s advice. “I did not give up and I took the so-called ” leap of faith “. I decided to believe in myself and with the support and encouragement of a dear friend, owner of a beauty salon, I decided to open a fitness center of my own and to ask for help from the owner of the same building of my friend’s beauty salon” says Jihan who is perfectly bilingual.

She is keen to describe her project to us in the big training room of the Fitness Center, while outside the windows a flock of sheep graze among the rubbish. “I was lucky” – she says with a serious but hopeful look – “the owner of the building supported me financially during the start-up phase, he did not charge me the rent for the first few months, giving me enough time to set up my business. In a short time, I became an entrepreneur and I now welcome in my center all those who want to take care of their body and mind”.

“It was not easy to start and manage the business“, confides Jihan that, despite numerous moments of confusion and crisis along the way, proved to have the tenacity to carry on and continue pursuing her goals. “My secret was to breathe” – she explains – “and still even today, when I have a problem, I stop and breathe“. Jihan has been focusing in women’s sport training, being the first female trainer recognized by the Palestinian Sports League. Jihan soon realized that to make more profit it was necessary to include courses for men and thus involved a second instructor, as attendance from women alone was not enough to guarantee an adequate profit. In general, Palestinian women are not encouraged to practice sport even in schools. Only recently, women have begun to claim the right to play sports also as freedom of expression and participation to public life, as well as liberation from male control over their bodies.

Central were training courses of the Italian Cooperation program which allowed Jihan to expand her business. She pursued goals and improved the management of her company step by step.

She has become more methodical, beginning to understand the functioning of the market, learning to organize the business administratively and today she can evaluate with confidence the strengths and weaknesses of her ideas in order to obtain the best performance. Thanks to lectures and on the job coaching, she deepened her knowledge of accounting, marketing, business planning and access to financial resources. She is developing her business facebook page. She has learned to plan income and outcome and how increase access to financial resources to widen her profit prospects. 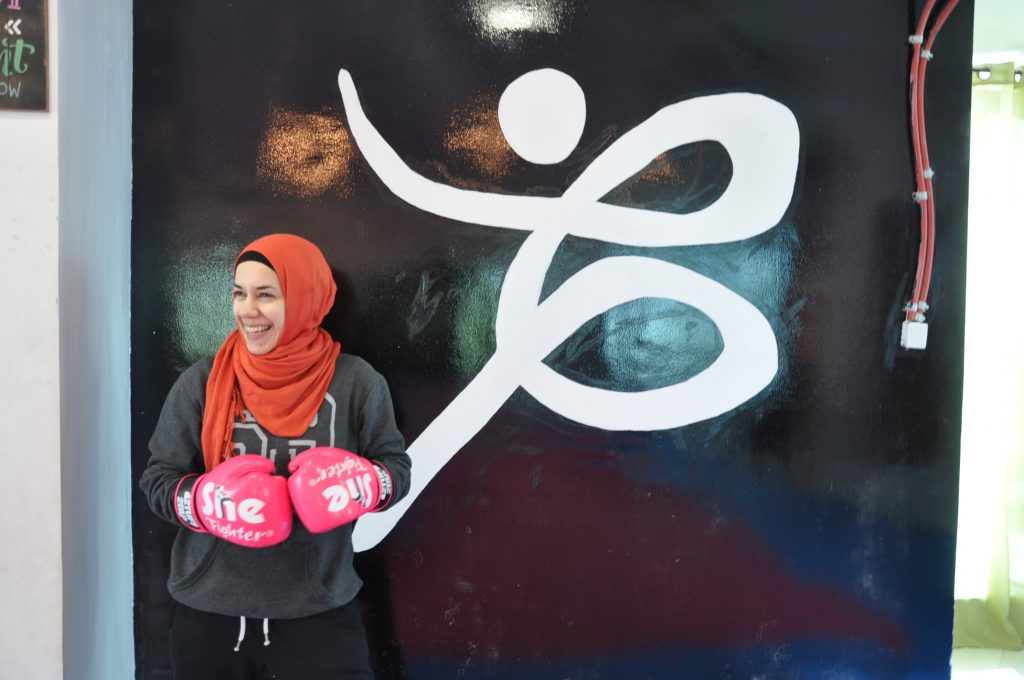 It is in fact astonishing the great progress she made after participating in the program, and she is now enjoying excellent results despite the great competition from other gyms in Ramallah. The different courses offered so far in her fitness center range from zumba, a Latin American dance that in 2012 in Palestine was not yet considered a form of sports training, to taekwondo, from kung-fu to kickboxing, from self-defense to capoeira. She also keeps herself constantly up to date with the latest musical trends and physical techniques in order to be able to provide to her customers the best entertaining and toning choreographies.

“Many girls and ladies who attend the gym say they feel a special vital energy in this place. Since they practice sport, they feel more balanced, psychologically stronger and freer to make their own choices; I propose an intense but all engaging type of training” emphasizes Jihan.

“Every difficulty can be overcome as long as there is life. I hope to be able to offer more and more quality courses. She who has faith has an inner reservoir of courage, hope, trust, peace and the certainty that everything will trun out at its best in the end” she explains saying goodbye to us before joing her students and starting a workout that awakens the body and mind by breathing.